From the Velay to the Cévennes, following the routes taken by RLS in 1878 with his donkey, Modestine (Travels withe a Donkey in the Cévennes) 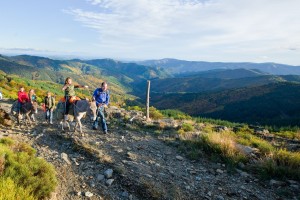 Fanny had returned to California and Stevenson didn’t know if he would ever see her again. In order to get his mind off things, he stayed at Le Monastier-sur-Gazeille and then took on a 220 km hike, accompanied by a donkey, Modestine, to explore the region of the Camisards that he compared to Scottish Covenanters.

“I think if the garden of Eden be anywhere, it is here in the valley of the Tarn as it goes down to Florac.”

The different landscapes which RLS passed on his 220 km walk in 1878 range from the volcanic plateaus of the Velay and the legend-rich land of the Gévaudan to the granite outcrops of mont Lozère and the blue vistas of the Cévennes mountains.

Network’s member on this territory :