We will resume our program around Stevenson and his texts set to music (Travel Songs, Chants du Voyage) on the occasion of the 140th anniversary of his trip with Modestine through the Cevennes. It will be Sunday, September 30 in Florac, at the Temple, at 17h, at the invitation of the Association On The Way Robert Louis Stevenson.

• melodies on poems by Child’s Garden of verses by Reynaldo Hahn,

• an unpublished musical on the Country of the Camisards, and some other surprises.

With Gareth Leyshon on piano and Marie-Virginie Cambriels on vocals.

‘Pipes to the Point’ was the première of the story of RLS’ return to North Berwick in 1887, following upon the death of his father in May of that year.

On this occasion, RLS was accompanied by a young piper from the local school, echoing the playing of Alan Breck Stewart in Kidnapped.

RLS reminisces and looks forward to his future triumphs.

A great time was had by a fascinated crowd of onlookers both near and far (we are talking bagpipes!). The filming of the event will hopefully be turned into a thing of beauty and of much wider value. 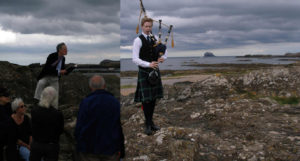 To mark the 140th anniversary of RLS journey in the Cévennes, A Donkey Caravan leaves Le Monastier on September 22nd and arrives at St Jean du Gard on October 6th. Celebrations and events are planned at all stages.

There will be at least two Scottish men in kilts!